As a large amount of new supply in Miami delivers, the vacancy rate slowly rose to 4.3 percent in the third quarter of 2017. Year-to-date the market has received more than 3.3 million square feet in new supply, and while the pipeline of tenants in the market seeking space is still high, absorption has not caught up with new delivery. Miami-Dade undeniably needed the new supply as vacancy rates reached a ten-year low of 3.6 percent at 2016 year-end, however, the market received a heavy supply of spec space within a six-month time-span.

The Broward County industrial market continues to strengthen in the second half of 2017. Vacancy rates have stabilized at a ten-year low of 4.0 percent across Broward County, down by 120 basis points over the third quarter of 2016. Absorption is slower than year-to-date 2016 due to the tightening of the market and new supply not quite ready for occupancy; there is a mass of 1.6 million square feet currently under construction with an estimated 80 percent being speculative development throughout Broward County.

The most prominent indicator of the strength of the Palm Beach industrial is the plummeting vacancy rate. Already at a ten-year low, vacancy rates declined a further 80 basis points in the third quarter of 2017 to 3 percent. Now the tightest market in South Florida and with limited development underway we can expect rental rates to continue increasing. 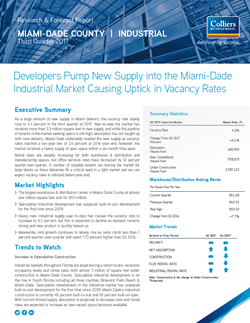