The office market in Miami-Dade County stabilized in 2017. Vacancy rates have hovered around 9 percent throughout the year with full-service rental rates historically-high at $34.18 per square foot. Class A rental rates have also lingered around $41 per square foot throughout the year. Net absorption year-to-date reached 1.3 million square feet, reflecting the continuous demand by office-space users in 2017.

The office market in Broward County remained steady in 2017 with low vacancy rates, high net absorption, and stable rental rates. Vacancy rates for office space hit an all-time low of 9.1 percent, a 130 bps decrease year-over-year. Development continues at a steady pace with over a half a million square feet of space currently under construction, in addition to the 687,000 square feet of office space delivered in Broward County in 2017.

The office market in Palm Beach County remained slow but stable in 2017. Vacancy rates hovered around 11 percent throughout the year while ending the fourth quarter at 11.6 percent, a 40 bps decrease year-over-year. Rental rates have also remained steady throughout the year ending the fourth quarter at $29.52 per square foot, a 5 percent increase year-over-year and Class A rates at $33.90 per-square-feet, a 2 percent increase year-over-year. Overall, the Palm Beach office market has not seen such low vacancy rates nor asking rates this high since 2007. 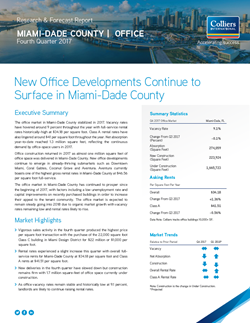